In a previous post I looked at barefoot running versus Nike Free 5.0 running.  The conclusion was while there was more feeling of foot flexibility running in Nike Free 5.0 V4 shoes still isn’t exactly the same as running barefoot.

Specifically this is what we looked at: 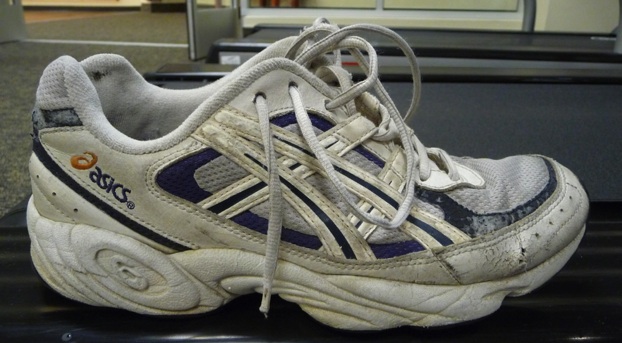 So I strapped on my trusty old pair of Asics running shoes (don’t even know what model they are cause I bought them so long ago) and put them to the treadmill test.  The test was pretty simple.  Just run for a little bit at 6 miles per hour and see how they felt.

The video below summarizes it below (excuse the dramatic overtones).

Like I said these Asics shoes I’ve had are pretty old.  I liked them a lot when I first got them since they were so light.  I’ve put a decent amount of mileage and the most recent stint with them has been training and running in a 10k race.  Training for that race I started noticing aches and pains I normally haven’t had with these shoes.  I’ve always had shin splints, but now I was getting knee pains I’ve never had.  This of course did not make me happy.

Anyway, watching the video you can actually see and hear the foot striking the treadmill.  It’s loud and it’s pretty isolated on the heel.  If you look at the foot position right before I land you can also see how the foot is angled very high, thus maximizing the stress put on the heel when contact is made.  The difference is more apparent when you put the Asics shoes against running with no shoes. 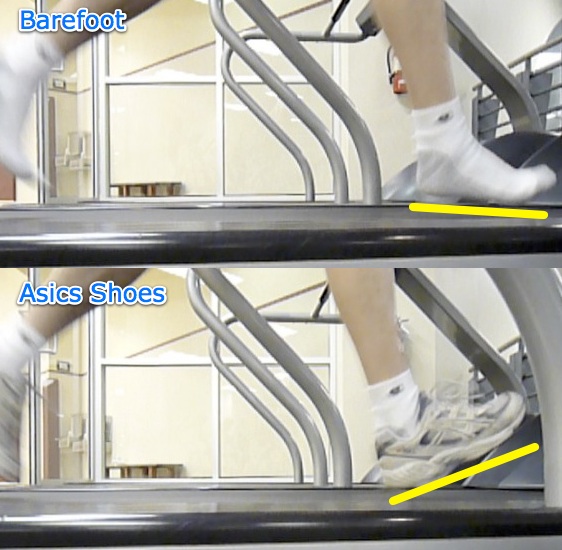 Looking back at the issues I had running in the shoes I can see how the repetitive stress on the heel travels up the leg and could cause problems with my knees or shins.  But of course I’m not scientist.

So the next thing to look at is how the Asics compare to the Nike Free shoes.  Watching the video you can see how the foot position of the Nike Free is slightly less than the Asics.  In addition you can hear a lighter “thump” when landing compared to the Asics. 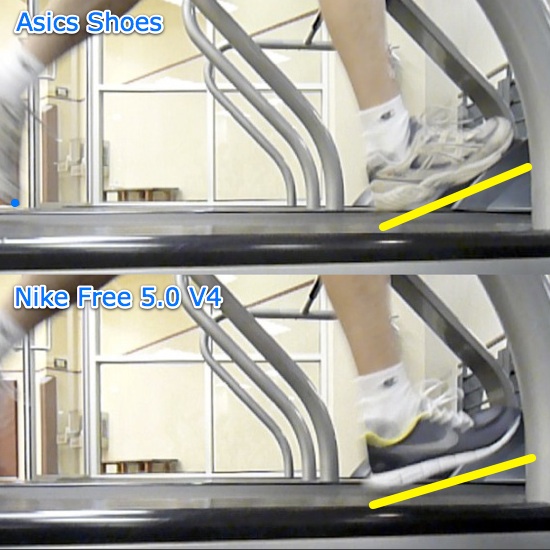 Finally, we can see how the barefoot running, Asics, and Nike Free stack up against each other with regards to heel strike. 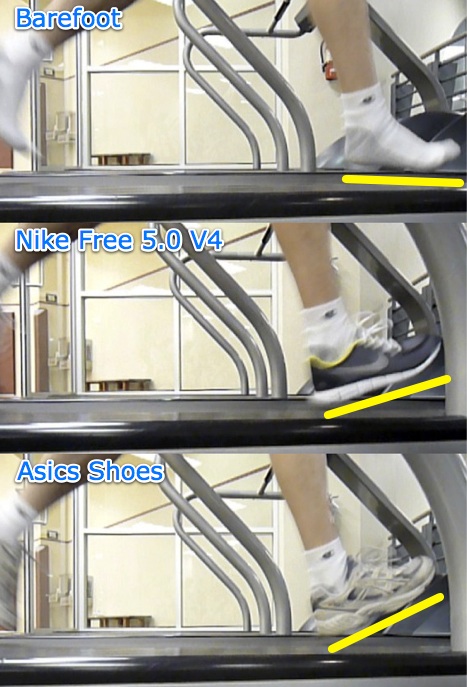 In the end it’s definitely clear that running barefoot out of these three options is better if you want to eliminate having more heel striking from your running.  And if like me you believe that less heel strike leads to less foot and running related injuries then barefoot running is probably the best thing to do.  However, if like me you don’t want to go through the pain of running barefoot and want an in between step then the Nike Free 5.0 V4 shoes are probably for you.