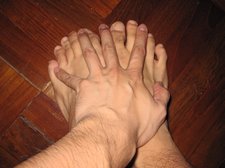 This was shared with us by Gillian, a former avid runner who was plagued with injuries and ever since has been finding the perfect type of shoe to help assist her heal some of her physical ailments, especially those that are preventing her from runnng as far and as hard as she would like:

Dear Team
Your request for information really touched me so I thought I would share my experience with you.

A quick background is that I grew up on a farm and ran for years and for mile s (it was miles in those days) barefoot and LOVED it, felt I had been born to run. In high school I had to run in shoes so bought a pair of Adidas running shoes with no gel or protection or anything â€“ just canvas sides and thin rubber soles â€“ bliss! By the way this was in the early 70’s. I wore those shoes throughout high school and university and I still have them today on display in our bar (we keep old sports equipment for show so I am not totally bonkers nor have a shoe fetish!) After some world travel and my first jobs I took up running again when I married and moved to Cape Town and was lucky to choose the Nike Air Pegasus â€“ the cheapest and least built up of shoes â€“ this is now the early 80’s.

I ran in Pegasus’s from then until 2007 when I unfortunately snapped my Anterior Fibular Ligament (a ligament that extends from the ankle to near the little toe) â€“ I was so silly and it was all my fault â€“ I was running hard and fast over uneven terrain and landed in a little hollow). An incorrect diagnoses by a Port Elizabeth Orthopaedic Surgeon (we now live in PE) had me walking â€“ no running â€“ for a year before I realised I needed better help and consulted a ankle specialist in Cape Town, he immediately diagnosed the problem and I had surgery to attach a piece of tendon where the ligament was and he assured me that in time the tendon would stretch and I would be able to run again.

3 months after surgery I started running in my Pegasus’s and unfortunately from being a totally neutral runner I started pronating badly â€“ so much so that I developed ITB â€“ prior to this my only running â€œinjuryâ€ was tiredness from running too much, I never warmed up or stretched â€“ just put the shoes on and ran with freedom. I went to a biokineticist and was given a set of exercise to strengthen the ankle but all they did was cause it to swell so eventually I was desperate enough to get orthotics hoping for a quick fix. Unfortunately all they did was cause planter fasciitis and knee problems from the different shoes he persuaded me to buy which had more support and protection and gels.

Then I read the book â€œBorn to Runâ€ and felt a surge of hope that all was not lost and that maybe just maybe I could run again if I could run with the barefoot running shoe and my body could then heal itself. Then the fun and games began to try and buy the shoe, I approached the local shoe shop that I have been supporting for over 20 years but the owner was not keen to stock the vibrams, then I phoned the company in Maitland and begged them to send a few pairs down to me and I would choose one and return the rest but clearly I sounded dodgy as the chap was not keen to do so, then I heard a store called Due South was stocking them so I rushed over there only to find they only stocked men’s shoes â€“ unless there was a demand they weren’t going to get ladies shoes.

My final step now is that I plan to be in Cape Town on Saturday 7th August and hope to get to the company in Maitland and get a pair then â€“ apparently the shoes have to be fitted because they conform so closely to the human foot but you can imagine how my 52year old feet have moved from their original shape over the years so I cannot just order a pair in my size and expect it to fit perfectly.

So right now, despite being an avid believer of the five fingers running shoe I have not been able to get my hands on a pair â€“ I luckily found some Asics sprint shoes â€“ no protection/gel/build ups etc and I train in those as they are the closest I can get to running barefoot. When I get my pair in Cape Town then I will run in them and let you know how it goes.

Thanks for your website I am a firm believer that our bodies are unbelievable machines and if only man did not interfere we could all run without injuries!

Thanks Gillian, for sharing your story, don’t forget to let us know how it goes.