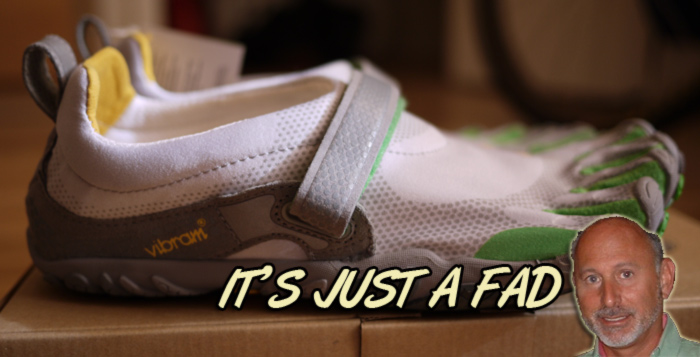 In a recent post on Huffington Post Dr. Robert A. Kornfeld, a practicing podiatrist and founder of the Institute for Integrative Podiatric Medicine, states that barefoot running shoes is just a fad.

Fads come and go. In my practice, one of the most frequent questions asked is about the effectiveness of barefoot running shoes. My answer? We are in the midst of another passing fad of products, this time designed to mimic or support “nature.”

There you have it.  Dr. Kornfeld has declared that these barefoot shoes really have no merit and it’s just a craze that people will get over in due time.   At the end of the article he concludes:

So let’s get real. If you are a serious runner, you need to see a podiatrist who is also trained in functional foot typing, as developed by Dr. Dennis Shavelson to find out if barefoot running shoes are for you.

Hmmm, so according to him I need to see podiatrist first to determine if barefoot running shoes are right for me? But I’ve never seen a podiatrist before so who would I turn to?  How about Dr. Robert A. Kornfeld!! Or maybe Dr. Dennis Shavelson (what’s up with the name dropping?)  They are podiatrists. There’s no way he would have any interest in promoting their own occupations where if I did go see them they could make more money!

All kidding aside.  It’s hard for me to take the good doctor seriously.  In the beginning of this article he says that the whole barefoot running shoes movement is just a passing fad.  Fair enough.  Everyone is entitled to their opinion.  But what confuses me is that he says if you want to see if “barefoot running shoes are for you” that you need to see a podiatrist first.  Wait.  If this is just a fad, shouldn’t he be saying that you should just all together skip this fad since there is no actual benefit to it?  It seems fishy to me.

It doesn’t help that most of his article is too scientific for me to understand.  That doesn’t discredit him, but if you are trying to explain your case you have to know who your audience is. Maybe you guys are smarter than me, but here’s an example of what I mean:

Since the majority of body weight passes through the first metatarsal bone and big toe — the first ray — during the process of forefoot propulsion, it becomes obvious that any abnormalities in this part of the foot spell disaster.

Uhhh…It is not “obvious” to me why this is a disaster at all (but I do know how to spell “disaster”).  This might make more sense to a room full of podiatrists, but to me (and I’m assuming the majority of Huffington Post readers) it’s all Greek.

In the end I feel like he’s making a case for barefoot running shoes.  He tries to discredit barefoot shoes by saying it’s a fad, but then he’s saying that if you are serious you should see a foot doctor to help you decide if barefoot shoes are right for you. He also doesn’t address why so many people are interested in barefoot shoes in the first place.  The main reason being because people who run in traditional shoes are having issues with plantar fasciitis, shin splints, knee problems, back pain, etc… and their current shoes aren’t helping. So wouldn’t any sane person want to try something else?

Also, here’s my question to the Dr. Kornfeld’s of the world.  If seeing podiatrists actually cured people of the running troubles they have wouldn’t everyone be lining out the door to see podiatrists?   Something isn’t working and that’s why people are willing to try things like barefoot running shoes.

I might not be podiatrist or founder of a fancy institute, but I think I have a simple prescription for you to find out if barefoot shoes are for you.  Just order a pair of shoes (they are like 60 to 80 bucks) and see if you feel better running.  If you do then keep them.  If not then go back to your normal running shoes.  It’s definitely a lot cheaper and less time consuming than seeing a doctor.

But don’t take my word for it.  Check out Dr. Lieberman’s Research on barefoot running or check out some of the interesting comments that people left on Dr. Kornfeld’s post I’ve included below.  You can judge for yourself if this movement is just a fad or not.

Reactions to Barefoot Running Shoes: How Effective Are They?

Traditional Running Shoes Was His Problem:

I find it funny that people are saying that running barefoot is a fad and will cause a rash of injuries as if people who run in high tech running shoes never get hurt. People act as if the injury rate for runners has diminished as running shoe technology has improved. It hasn’t. Got a stress fracture in my foot with my running shoes. Bought a pair of vibrams because I decided that my running shoes were the problem not the solution. That said, ran my first 50 miler last year in my Vibram five fingers, and I am planning to run my first 100 miler sometime next year.

I would recommend you try them. I’m 45 & pretty athletic, also with high arches. I started wearing them after I realized that my feet hurt at the end of the day, enough to make me go home from whatever I was doing. Caveat – I don’t run in them. Instead I wear them in the woods, on trails, in parks, on natural surfaces. There are lots of folks who have healed their plantar fasciitis with VFFs. Just take it slow & get used to them.

Ran Marathon with No Problems:

Ok, i felt great after running 26.2 miles in the LA Marathon in the Vibrams. Much better than I felt running the NY Marathon in “proper” running shoes the year before. The flaw is in the “proper” shoes, which enable us to run in an improper way, namely heel-strike. Your foot, ankle, calf, knee and thigh are actually designed quite well to absorb the impact of hard surfaces, be they hard-pack dirt, rocks, or concrete/a­sphalt. Do you think our ancestors ran only on soft terrain? nice grass and sand? I run distance 3+ times a week in NYC, exclusively on those hard surfaces and haven’t had even a minor injury, strain, etc, in the past three years that i’ve been wearing the Vibrams. No flaw from my perspective.

Before I got VFFs, I was so frustrated – every shoe I tried made my feet absolutely ache and I was frequently injured (knees, feet, hamstrings­). My problems went away as soon as I started wearing the VFFs. They feel so much more natural too, not like you’re trying to run with planks attached to your feet!! You can feel every little muscle in your feet in toes activating as needed, it’s very exhilarati­ng!

After the marathon I never ran in my Nimbus’ again. Now I run in the Nike Free line of shoes and the Brooks Green Silence, which is considered a running flat but is super flexible and has a low heel to toe drop ratio. It is more shoe than the Nike but significan­tly less than your typical running trainer. My running has never been better. I am faster, stronger, and run with considerab­ly less pain and strain. More importantl­y, I enjoy the running experience much more — it simply feels better to run more efficientl­y and with proper form, something “barefoot” and/or “minimalis­t” shoes lend themselves to.