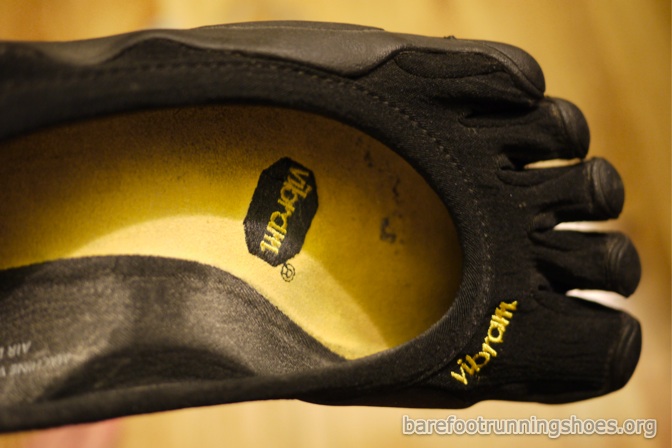 It’s been about 7 months since I first received a pair of Vibram FiveFinger Classic shoes.  It feels just like yesterday that I went on my first VFF Classics run, then my second run, and then playing barefoot tennis in these magical shoes.  Time flies while you’re having fun so I thought it would be good to recap how I’ve been doing with the minimalist FiveFingers Classic.

Before I got the Classics i was running in the Nike Free 5.0 V4.  Going from traditional running shoes to the Nike Free 5.0 was the first step in opening my eyes to world of minimalist footwear.  It was amazing how nice it felt in the Free’s to be able to flex my foot while I walked and ran.  However, things gotten taken to a whole another level once I started running in the VFF Classics.  The Nike Free’s are flexible, but the Vibram’s are just in another league of barefooted-ness.

My biggest problem when I started running in the Classics was I tried quickly to run the same time and distance as I could with my traditional running shoes.  The first day my calves and shins (and back even) were all sore.  I just wasn’t accustomed to this new style of running.  One thing that I had to consciously work on as well is changing over my foot strike from heel-toe to mid-foot / fore-foot striking.

The video below illustrates my heel striking running technique, which subsequently got made fun of by the numerous Youtube commenters (got to love those guys).

It probably took me a good solid 4 months of regular running in the Classics to adjust my running style to mid-foot / fore-foot striking.  Luckily since the VFF Classic is super flat it makes this transition a lot easier.  The Nike Free 5.0 with the raised heel makes it a lot more difficult to strike flat-footed or in the mid-foot area.  One consequence of this new running style is that my foot wasn’t used to the new impact points (the fore-foot) so ultimately I could not run as far since the repeated stress of landing on concrete often made my fore-foot quite sore.  In these shoes you feel everything…including just how hard concrete is.  So again, these shoes have taught me the value of patience and to slowly ramp up your mileage (otherwise I can see how you could really hurt yourself). 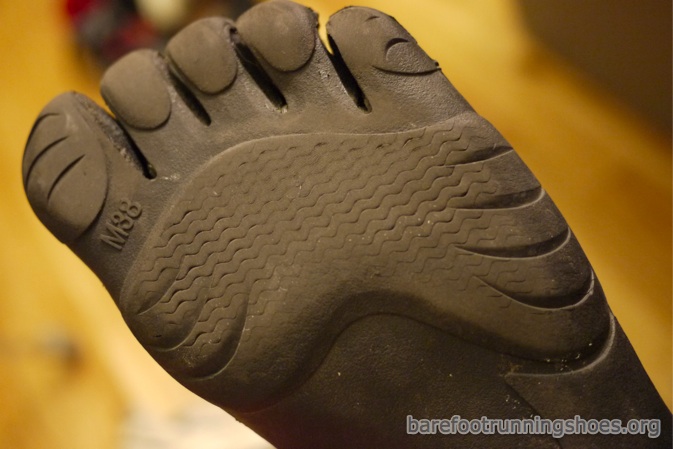 Up until a few weeks ago I was running in the FiveFingers at least 2 to 3 times a week for about 2 to 3 miles at a time.  My foot definitely had adjusted and was used to running in them as I wouldn’t get sore calves like I did when I first started running in them.  My shin splits have kind of gone away too.  I say “kind of” since I still get shin splints in my left shin, but not so much in my right shin if at all.  I’m thinking this might have had to do with an old tennis injury I had (I sprained my left ankle, actually not playing tennis but juggling tennis balls and accidentally slipping on one).

The reason I stopped running in them is that ever since I’ve go them I’ve kind of ignored the fact that my pinky toe was kind of scrunched.  This made it sometimes a little painful to run as my toe would be crunched into its little toe compartment.  Sometimes it would be more bothersome than other times.  I think this was just a result of my foot naturally shrinking and expanding.  Either way, I started noticing that my pinky toe nail was getting deformed!  So I figure the main problem is that the Classic I ordered while form fitting, are actually a little too small.  For anyone looking at getting a pair I’d order slightly larger than you think.

Despite the deformed toe I’d like to run in them again.  They are nice, even if they do get a little smelly/funky after a while of running in them.  I guess that’s when you need to learn how to wash your VFF’s.  You do get quite a few stares and questions, but as much as I like the attention, I just like the feeling of freedom and ninja-ness that I just don’t get with traditional running shoes.