The Newton Running Shoes were developed by Newton Running, a new company based in Boulder, Colorado in the United States. The shoe boast new patented running technology that assists the runner in proper form and promote a more natural running style. Typically, many runners strike with the heel first. This is not natural and can lead to joint and other leg and foot injuries. The Newton Running Shoes attempt to correct that behavior by training users to strike mid or forefoot region first. This “training” is most likely implemented by the extra padding and “actuators” that Newton Running refers to. The concept of Land, Level, Lift was also coined by the team at Newton. 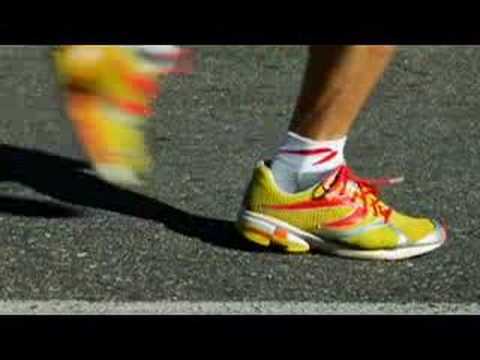 While running in Newton Running shoes, your feet will sense the ground faster, you’ll have a better feel for the road and you’ll want to strike the ground with the actuator lugs located under your forefoot. Right away you won’t feel the need to land on your heel. If you already run with a mid-foot or forefoot strike you will notice that you are on and off the ground quicker with less harsh impact and greater forward propulsion. Pronation and supination are terms used to describe the inward and outward roll of the foot and ankle during normal running motions. The Newton Running Shoes are said to help prevent over and under pronation and supination so the person wearing the shoes can run in proper form.

Extreme pronation and supination are associated with many foot ailments such as arch and heel pain, flat feet, sprains, knee/hip/back pain and even corns and calluses. Many athletes and medical practitioners recommend specific insoles to correct these problems. Based on the research and studies that Newton Running have conducted, their shoes are often times one of the recommendations as well.

Although you are not technically running barefoot when wearing the Newton Running Shoes, Dr. William Rossi in a 1999 article in Podiatry Management still said it best with regards to going barefoot :

It took 4 million years to develop our unique human foot and our consequent distinctive form of walk, a remarkable feat of bioengineering. Yet, in only a few thousand years, and with one carelessly designed instrument, our shoes, we have warped the pure anatomical form of human walk, obstructing its engineering efficiency, afflicting it with strains and stresses and denying it its natural grace of form and ease of movement head to foot.

“Newton running shoes have a unique feel as soon as you put them on”, they are lightweight, breathable, comfortable, highly cushioned yet stable and responsive.

The price of Newton Shoes are higher than most other brands like Asics, Nike, New Balance or Vibram. But those who who do fork up the cash swear running in Newton Shoes help their form immensely. Although many of the Newton share similar fashion sense and style, the intricacies of the design make them unique running shoes. Whether you over/under pronate or supinate, buying a Newton shoe that will fit your needs won’t be an issue. Here are the most popular versions of the barefoot running styled shoe:

In many ways, the Newton Running Shoe story is the typical entreprenerial story of passion, business saavy, and obsessive persistence mixing together to produce the perfect formula. The story involves a serial inventor who dabbled in everything from inventing the best air purifier for smoke to sleeping solutions, an avid runner and orthodics specialist, and an investor. After multiple rejections from all the large shoe companies (Nike, Addidas, etc..) regarding their technology, the partners decided to strike off on their own. With no product development and marketing expertise, co-founders Jerry Lee and Danny Abshire bought out the rights and ownership from the inventor and built a successful boutique and niche product that has had a loyal and growing following ever since. Here, you can find the entire story of how the Newton Running Shoes came to be.