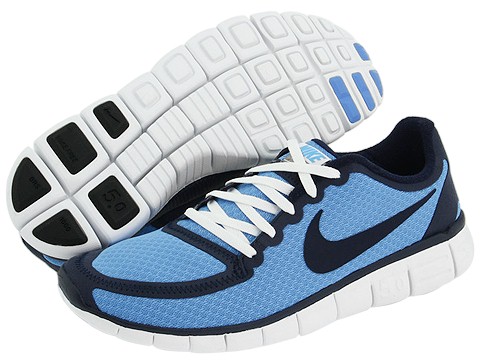 I’ve been hearing a lot of good things about Nike Free shoes. People were telling me how they were Nike’s response to Vibram FiveFingers shoes and the growing amount of research that is showing that extra supportive athletic shoes have done little to help prevent foot injuries (and might even be a big cause of them). Either way I was intrigued since I’ve been a fan of VFF’s I wanted to see what the “competition” was up to.

Nike states the Free line of shoes is

The first thing I learned about Nike Free shoes is their whole naming convention is VERY CONFUSING.  Nike launched their Free line back in July of 2004 with just one shoe, the Nike Free 5.0.  Now in 2009 they have what seems like over 15 some shoes.

The following are men’s shoes with the Nike Free in the product title (taken from the Nike Store website):

The following are women’s shoes with Nike Free in the product title:

The mixture of acronyms, decimal numbers, roman numerals, and “plus” signs makes their whole line of shoes hard to decipher (it’s like translating a foreign language).  I think it’s way too much.  I mean they are selling shoes not computer software!  They should simplify their naming system.  But I’m digressing, I’ll try to step you through what I’ve learned about Nike Free jargon.

Nike initially launched the Nike Free shoe line with the intention of using a 0.0 to 10.0 scale to denote how “barefoot” a shoe is.   Zero (or 0.0) is technically barefoot and a 10.0 is a traditional athletic shoe.  Using this scale it makes more sense now when they have Nike Free 3.0’s, 5.0’s, and 7.0’s.  As the numbers increase the amount of traditional shoe support increases.  Nike Free shoes only come in 3.0, 5.0, and 7.0 flavors.  For people looking for a more barefoot running experience (think Vibram FiveFingers) then the Nike Free 3.0 probably makes the most sense.  For people who want to slowly transition into barefoot running by building up foot strength that where the Nike Free 5.0 or 7.0 makes sense.

What’s confusing is where the other shoes fall in the spectrum.  It’s as if Nike’s marketing department fell in love with this “Free” concept and decided to create a bunch of new shoes with the title Nike Free while abandoning the barefoot scale they created.

You can check out a the official Nike Free running page.  They have an interactive tool that allows you to “Explore the Nike Free Family.” 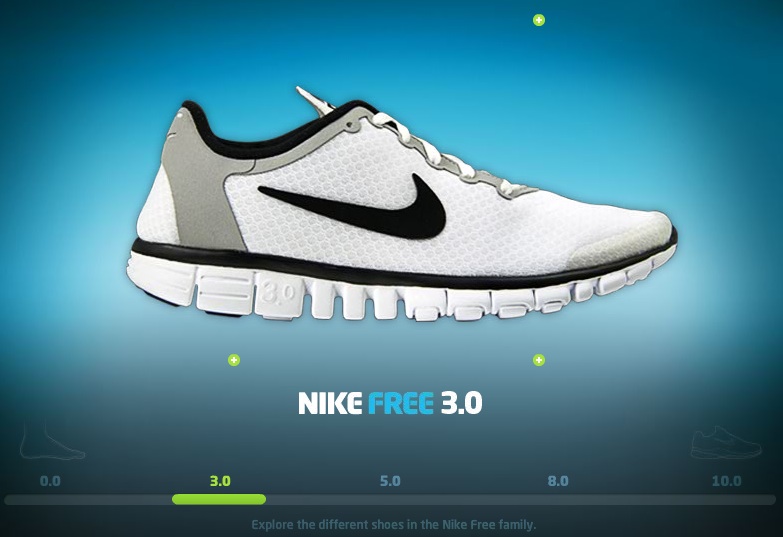 The only problem is that this tool only shows you 3 Nike Free shoes.  And as we learned there are quite a few more Nike Free shoes than 3.  As a rule of thumb I would place the training shoes in the upper 8.0 to 9.0 on Nike’s barefoot scale.  So if you are truly looking for a barefoot running shoe/experience I would stick with the Nike 3.0’s or 5.0’s.  However, like I said I’ve read pretty good reviews for all their shoes.

Hope this helped!  It took me a while to figure all this out.