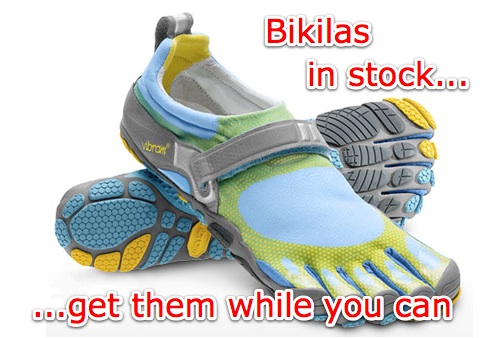 For those of you who don’t know Vibram FiveFingers has a new shoe out especially made for running, it’s called the Bikila (named after the Olympic Gold Medalist Abebe Bikila, who won the 1960 marathon event, running barefoot!).  It has the same FiveFinger design that so many have been enjoying, but includes a little more traction on the bottom that concrete runners can appreciate.

In any case we just got word from Travel Country, a popular supplier of Vibram FiveFingers, that they just got a new shipment of Vibram FiveFinger Bikilas.  This is a pretty big deal as we’ve been hearing a lot of complaints about these shoes being out of stock (since they are so popular).  So if you’ve been waiting to get a pair you better act fast as these things are apparently flying off the shelves.